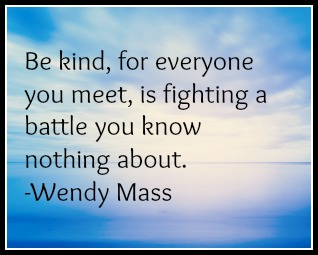 September is Suicide Awareness Month. While it can be a difficult topic to talk about, we need to be talking about it and reaching out to those who are feeling isolated, hopeless and having thoughts of harming or ending their life.

Estimates vary on the annual number of suicides in the US with the most recent data gathered from The Center for Disease Control and Prevention (CDC) 2011 Data and Statistics Fatal Injury Report. In 2011, the CDC reported the number of US suicides was 39,518 individuals.

39,518 sons or daughters, friends, family members, co-workers, fathers and mothers. Can you even begin to imagine the amount of people impacted and left after the loss of a loved one to suicide?

Evolutionary psychologist, Robin Dunbar, has researched the number of relationships a person can maintain in one’s social network. Through his research of history, communities and social relationships, the number he identified was one-hundred and fifty. If we take this number, and multiply it by the number of suicides from the 2011 CDC report, we can roughly estimate a range of upwards of six million people impacted by suicide in 2011. This is an enormous amount of individuals dealing with grief.

The aftermath of suicide is overwhelming for family, friends, co-workers and loved ones. While one individuals pain ends in this world, the loved ones are left to grieve in two ways; one the loss of their loved one and two, the way in which their loved one died.

Suicide leaves trails of pain, heartache and sorrow for those left to piece together and understand the “why’ of suicide. As a therapist, I have seen first hand the impact of suicide on family members; it is truly heart wrenching. This is not to imply a shaming or inducing guilt to the person who commits suicide, rather; every behavior has a consequence, cause and then effect. When a loved one commits suicide, it is a painful process of grieving.

Suicide has often been referred to a permanent solution to a temporary problem. Individuals who attempt or commit suicide may view self-harm as an option to cope with their problems or issues. Many people have difficulty understanding the “why” of suicide:

There are many questions people have after someone has committed suicide. If we are to understand the “why,” we must first understand some facts about suicide.

The following statistics on suicide are from the Center for Disease Control and Prevention (CDC), all gathered from the 2011 CDC Data and Statistics Fatal Report.

According to the American Foundation for Suicide Prevention, several factors contribute an individual’s risk of suicide risk include:

What can we do? First, start with understanding the act of suicide has many variables, at the core, it is a state of pain, hopelessness and isolation.

Feeling alone even when you are in a roomful of people.

Feeling alone with the experiences in your life.

Feeling alone that no one will understand the pain, shame, guilt, sadness you feel.

Fear the pain, whether emotional, physical or spiritual, will never go away.

I would not be a practicing clinical psychologist if I didn’t believe there was hope for people struggling with mental health issues, pain and suffering. One of the variables that can decrease an individual’s risk of suicide is receiving effective mental health therapy. Many people continue to have negative perceptions about reaching out for mental health support, and this needs to be changed. Engaging in therapy takes courage, strength and reduces isolation. Other variables that decrease one’s risk for suicide include connection and positive relationships with family, friends, co-workers and the community, as well as healthy strategies and skills to cope with stress and problems.

Blogger and author, Glennon Melton of Momastery, wrote a raw and honest post about her reaction to hearing about Robin Williams suicide. She openly shares her struggles with mental health issues and provides a powerful and candid lens of personal fears with suicide. Reading her post will help those who don’t understand the struggles of hopelessness, depression and addiction, understand a little more about the ongoing struggles many people with mental health issues deal with everyday.

I recently read a quote on social media that summed up profound compassion for others:

“Be kind, for everyone you meet is fighting a battle you know nothing about.” -Wendy Mass

If you know someone who is struggling with mental health issues or going through stressful life events or circumstances, reach out, be a friend and caring person, help decrease isolation and increase connection. If you know someone who is talking about wanting to harm themselves or is in pain and says they are feeling hopeless, please encourage them to seek professional mental health support and evaluation and/or contact their physician. Please pass on this number- where trained individuals can assist those in distress.

I am hopeful that if any healing comes out of the trauma of losing a beloved actor, Robin Williams and Oregon mother and wife, Jennifer Hutson to suicide, is that we begin to talk about suicide and improve ways to help those suffering in an effort to reduce the number of suicides.

One thought on “The “Why” of Suicide”