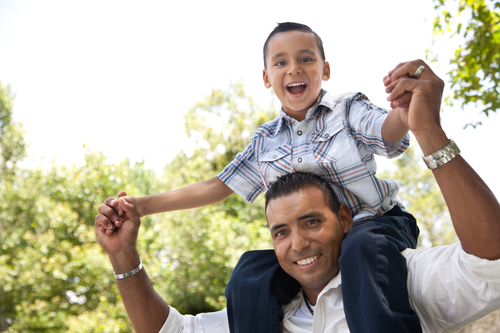 Father’s Day is in a few days, and I was touched to learn the origins behind the creation of holiday. Father’s Day was inspired because of a daughters appreciation for her single dad raising five children.

In 1909, Sonora Smart Dodd, living in Spokane, Washington, was listening to a sermon at her church all about Mother’s Day. Sonora’s mother had died years ago in childbirth, and it was her father, William Jackson Smart, who was raising and caring for Sonora and her four siblings as a single father. Feeling inspired to honor the dedication and work her father gave to his family, she began a journey of creating petitioning her town of Spokane to establish the first Father’s Day. And the reason it is in June has nothing to do with following Mother’s Day in May. Instead, Sonora’s fathers birthday was in June, thereby inspiring the chosen month. Establishing Father’s Day as a national holiday didn’t happen until years later when in 1972, President Richard Nixon signed into public law making the day a permanent holiday.

As we get ready to pause and celebrate the dads in our lives, whether our dads , grandfathers, brothers, uncles or ‘dad’ role models, it is important to remember that with the changing family roles at home and in our community, dads need to focus on self-care and well-being, just as moms do.

We are parenting in a time when dads, more than ever, are actively involved in parenting compared to any other generation. Finding from surveys conducted by Pew Research (2015-2017) showed the following trends in fatherhood:

There is no doubt the landscape of parenting is changing. And with these changes some challenges present. What I observe in my role as a clinical psychologist working with parents, dads need to give themselves the time and space to take care of their well-being.

Dads are experiencing stress and strain related to managing work, parenting, and relationships. What is a concern, dads, often hold stress in, and do not reach out for support as readily as moms do. And this trend is seen not only in my office. Research from the American Psychological Association has shown, men are less likely to reach out for therapy when distressed compared to women. I can share this though, over the past decade in private practice, when dads do come in for support (often encouraged by their partners or primary care physicians) the response is powerful and positive.

For more information on well-being and self-care for dads, please take the quiz: How is Your Well-Being and Self-Care for Men and/or Are You a Burned Out Dad?

Wishing all the dads who care for, nurture and support their families, a wonderful day, celebrating you! Because YOU matter so very much!